That winter 1965, the Rolling Stones had just released Satisfaction, apparently the dirtiest single of all time.

It wasn’t dirty at all – the most suggestive thing about it was the title – but they were at a height of notoriety encouraged by their manager, Andrew Oldham, who realized that the fans wanted something from bolder than the family Beatles.

Soon after, they did a gig at the ABC cinema in Stockton-on-Tees and it was there that I first met Charlie Watts, interviewing him and the rest of the band backstage as as a small reporter for a northern newspaper.

With the press describing them as scruffy and dirty, I expected to be greeted by a bunch of growling Neanderthals, but Charlie was the most hygienic, fragrant, and well-dressed pop musician you could wish to meet.

The others were more wacky but even Brian Jones, the prototype rock star, washed his hair twice a day and they were all perfectly nice to me, even signing a page in my notebook.

I first met Charlie Watts, interviewing him with the rest of the group behind the scenes as a little reporter for a northern newspaper, in 1965

When Charlie, a former art school student, added his name, he put a little decorative border around all of the signatures, as well as the band’s name in case I forget who they were.

Nobody thought then that they would leave even six months later, let alone over 50 years.

Charlie, who was then 24, hadn’t long given up a regular job at an advertising agency, and he still lived with his parents in North London.

A girl I knew had gone out with him a while earlier and told me how every Friday night he brought his mother a coffee and nut cake. He also had one for this young woman, only he would remove the nut from the top of her cake and put it on top of her mother’s so that she would have two.

By the time I met him he was married to Shirley Shepherd, a sculpture student at the Royal College of Art. They were together until his death and he attributed the success of their 57-year marriage to “I wasn’t really a rock star.”

Throughout his life he has remained loyal to Shirley, once explaining that “on tour everyone sleeps with everyone but I have no one to sleep with so I talk to people and draw.”

As for talking, I was one of the people he often came into conversation with when I accompanied the Stones on various of their tours. 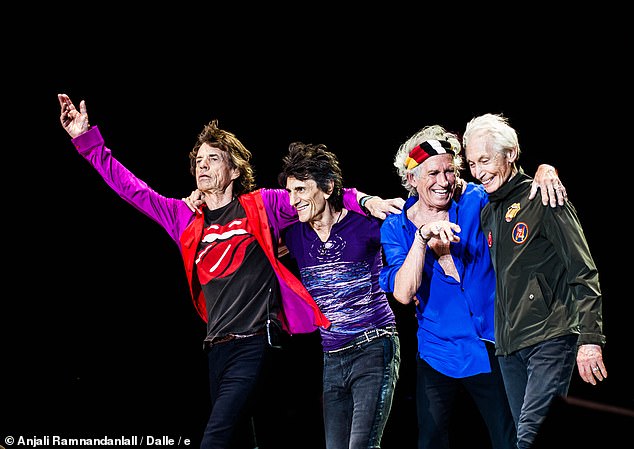 With the press describing them as scruffy and dirty, I expected to be greeted by a bunch of growling Neanderthals, but Charlie was the most hygienic, fragrant, and well-dressed pop musician you could wish to meet. Pictured: The Rolling Stones in 2018

Back then, before rock industrialized and PR limited you to half-hour interviews, you could really get to know the musicians, and Charlie made himself available far more than most. others.

It would take years for others to get out of their hotel suites each morning, but he would always get up early, lurking in her panties or whatever fancy outfit he chose for the day.

I knew there was no point in trying to tell him about the band because he was fed up with people trying to get him to say something compromising.

Instead, he liked to talk about things like the American Civil War and The Buffalo Bill Wild West Annual, a 1950s children’s book that we loved as kids.

We both remembered Wild hero Bill Hickok getting shot in the back by “a two-bit player called Jack McCall”. Charlie told me how, as a little boy, he carefully covered his copy of the annual with brown paper to keep it in perfect condition.

Apparently he did this with all of his books, a telling detail that wouldn’t have made a good diary copy at the time, but told you everything you needed to know about how far he was from. ‘to be “rock’ n ‘roll”.

He was truly the reluctant Rolling Stone. His first love was jazz and his publicist once told me that wherever they are in the world Charlie always wanted to catch the next flight home.

He also didn’t have time for Stones politics. 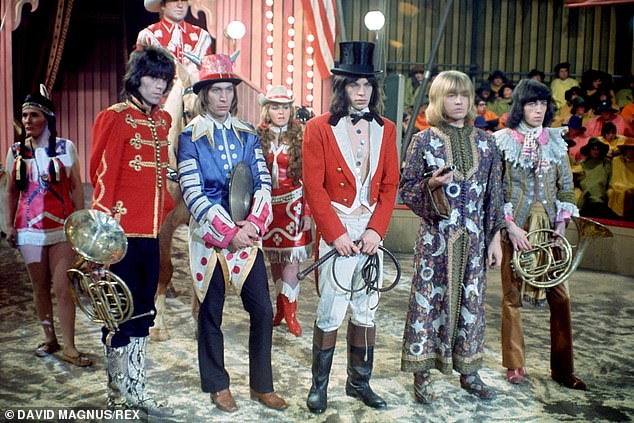 The others were more wacky but even Brian Jones, the prototype rock star, washed his hair twice a day and they were all perfectly nice to me, even signing a page in my notebook. Pictured: The Rolling Stones in 1968

They were worse than the Borgias, falling out forever, but they all loved Charlie because he wasn’t a competitor and he wasn’t an attention seeker.

In a world where everything is a question of image, facade and pretense, he has always been resolutely himself. Being so triumphantly not a Stone while he was in the Stones was pretty amazing, as was his lack of ego.

The duration of some of their concerts involved placing a chamber pot on the stage so that they did not have to return to their dressing rooms during performances. This was placed near Charlie’s drums and it mustn’t have been nice to have your band members relieving themselves out of public view but directly in your eyes.

You can’t imagine great characters like Ginger Baker and Keith Moon, the drummers of Cream and The Who putting up with that, but it was typical of Charlie that he did.

Upon hearing of his death, after all these years with the Stones, it is as if one of the great stone images of American presidents has been removed from Mount Rushmore.

And that’s an apt image because Charlie really had a face of stone, looking to me like a rock and roll version of Buster Keaton, the no-smile silent film comedian. His humor was so dry that he really had to be listening, but there was something ironic about his demeanor that suggested he had never taken things seriously.

On one of their tours, the Stones performed in Orlando, Florida, and I accompanied them to Disney World, where attractions included a ride through the Old West. 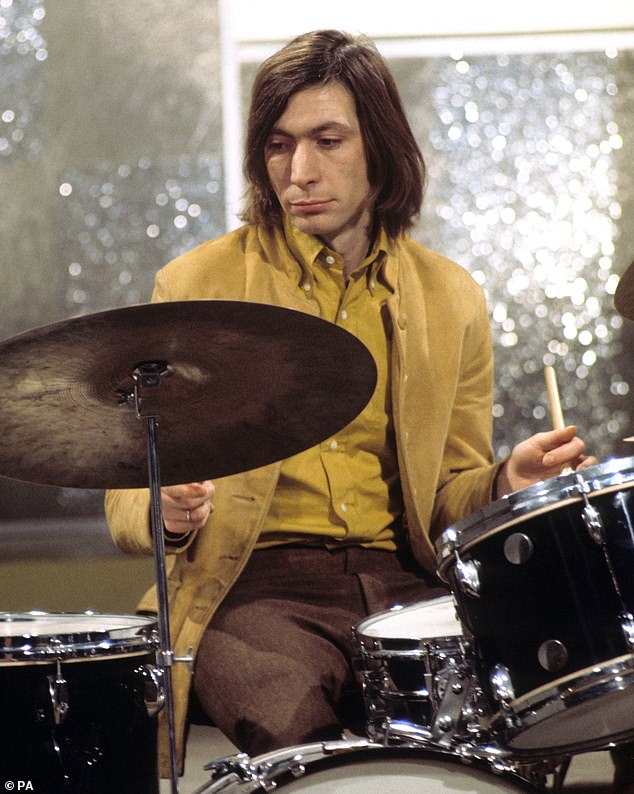 By the time I met Charlie (pictured in 1968) he was married to Shirley Shepherd, a sculpture student at the Royal College of Art.

You would have thought it was right on Charlie’s Street, but as always, it was hard to tell if he was having fun or not. However, he was not always so straightforward.

When news arrived that Brian Jones had been found dead in his swimming pool in 1969 after being fired from the group he had formed and even named, Charlie couldn’t stop crying.

When he finally reached the limits of his tolerance, it was typical Charlie way. Wild Bill Hickok himself would have been proud of the way he handled this incident in 1984 when he hit Mick Jagger for calling him “my drummer”.

What most accounts of this setback miss is that Charlie barged out of the room, leaving a shaken Mick Jagger trying to figure out what had happened and suggesting that he would be back soon for himself. excuse.

Sure enough, Charlie reappeared, but only to hit Mick again: “Just so you don’t forget.”

It came at a difficult time in Charlie’s life. As has been reported in numerous obituaries, there was a two-year period where, with the future of the group in question and family issues including the expulsion of her daughter Seraphina from school for smoking. drugs, he started hitting the bottle and developed a habit of heroin. .

I was surprised by this. Many musicians are somewhat needy and empty people for whom alcohol and drugs fill the gaps in their lives when not on stage, but Charlie always seemed very self-sufficient. 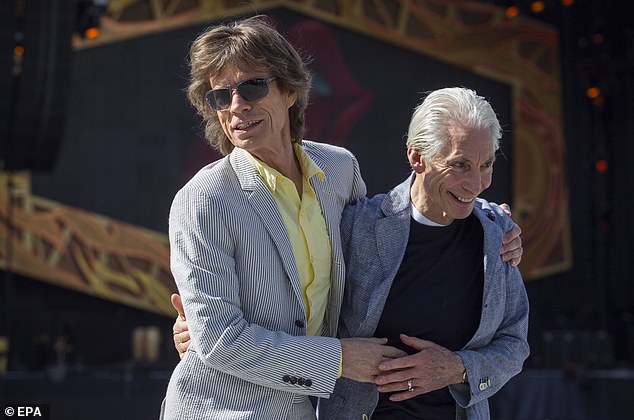 There was a lot going on for him in the Devon Estate where Shirley bred Arabian horses and collected vintage cars. Perhaps this explains why his wasted period was relatively brief, lasting only two years, before a fall down the stairs of his cellar while going to fetch a bottle of wine resulted in a fractured body. ankle and the realization of all he stood to lose, his marriage included.

In the farming community he was a part of, he was a much loved and respected local figure, supporting the local hunt with generous checks, and known in his local pub, The Duke of York in the village of Iddesleigh, under the name of ‘Drummer’.

Of course, life was not without its challenges, including her successful treatment for throat cancer in 2004.

Earlier this month, it was announced that due to surgery for an unspecified illness, he would not be joining the Stones on their upcoming 13-date tour of the United States.

His death, like his life, was far from rock ‘n’ roll. Dying peacefully in a London hospital, he was surrounded by his family – a cherished husband, father and grandfather, one of the greatest drummers of his generation.

And still the kind and courteous man who drew in my notebook all those years ago.

Previous Susan Chitty, ruthless biographer of Victorian notables who stormed with literary assassination of her mother Antonia White – obituary
Next ‘This book is two years of research and 15 years of experience’-EXCLUSIVE